We are happy to present one of the true giants in the field of patient-centered medicine, self-healing, Dr. Bernie Siegel. Bernie, the author of numerous bestsellers including the groundbreaking 1986 book, Love Medicine and Miracles, will explore some of his personal history, and what attracted him to the practice of Mind-Body Medicine. 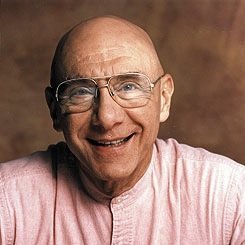 Bernie, a top ranked student, graduating with honors, Phi Beta Kappa, as well as Alpha Omega Alpha (the Medical Students’ Honor Society), Dr. Siegel was a professor of medicine and a staff surgeon, a clinical professor of surgery at Yale, and was a real non-believer until a surprising event occurred in the mid seventies that would cause him to redirect his life.

Bernie will discuss the miracles he has seen – things that happen that we don’t understand. When a person heals his cancer, that’s no longer a miracle to Bernie – he has learned that when your body knows that you love your life, it heals itself. There’s a good reason. He says that strokes, suicide, and myocardial infarctions happen on Monday.

We will explore the remarkable ability of the body to heal itself – something that now has been well-documented by medical studies, and how living a life of purpose and Love can sustain our health and our life. After all, as Bernie says, “If we don’t love our lives, our body sees death as the solution.” Probably not the solution we’re hoping for though.

We’ll discuss some of the current studies as well as some of Bernie’s anecdotes – like the study that indicates that people above 50 years old whose parents said, “I love you,” have less than half of the number of major illnesses of those whose parents never said it.

Bernie will also share with us the rules for living he received from his mother and how they have affected his life and the lives of millions more. We’ll talk about the power of story – and how the only thing truer than the truth is a story, how to create the authentic life you’re here to live – not merely accepting the one that’s given to you, along with all of the warmth and humor we’ve come to expect from Bernie.

For many, Bernie needs no introduction; he has touched many lives all over our planet. In 1978 he began talking about patient empowerment and the choice to live fully and die in peace. As a physician, who has cared for and counseled innumerable people whose mortality has been threatened by an illness, Bernie embraces a philosophy of living and dying that stands at the forefront of the medical ethics and spiritual issues our society grapples with today. He continues to assist in the breaking of new ground in the field of healing and personally struggling to live the message of kindness and love. His web site is www.BernieSiegelMD.com.