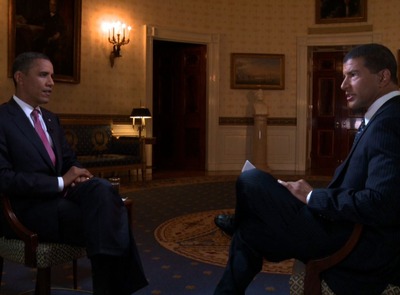 Here I am the proud papa again! Our eldest son, Emmett Jr., has won another journalism award to add to his Emmys and his Associated Press Excellence in Journalism win.

Now his interviews of Barack Obama and Herman Caine (Watch the videos here of Interview: Barack Obama & Emmett Miller and Herman Caine & Emmett Miller) have enabled the network BET to win this year’s Walter Cronkite Award for Excellence in Television Political Journalism. Two of the 5 pieces submitted for judging by a panel of nine judges chaired by Geneva Overholser, director of the USC Annenberg School of Journalism.

The Walter Cronkite Awards for Excellence in Television Political Journalism are named for distinguished journalist and longtime CBS anchor Walter Cronkite. In this year’s competition, CBS, NBC, and the other major networks lost out, along with well over 100 other entries received in 2013 – a record.

“It was an especially strong field, and judges were encouraged that it was so hard to pick winners,” said USC Annenberg professor Martin Kaplan, director of USC Annenberg’s Norman Lear Center, which has administered the biennial awards since 2000. “The entries demonstrate that against long odds, TV journalists across the country are determined to get it right in a medium that most Americans still turn to in order to learn about their electoral choices.”

Jurors noted that BET issued “a call to action to potential voters.”  While stories were substantive and insightful, “a lot of heart and passion went into pieces” as well. Moreover, they opined that all Americans deserve the level of solid coverage that [this network provides its] audiences.”