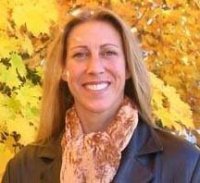 Reinette was born in San Francisco on April 10, 1966. She moved up to Nevada County in 1971 as a small child and has had the great fortune of living most of her life in Nevada County, graduating from Nevada Union High School in 1984.

In 1989 Reinette trained with the International South Pole Expedition and continued her pursuit of extreme cold adventures in the early nineties by founding and organizing the American Women’s Trans-Antarctic Expedition. Though Reinette did not participate on the actual expedition, the team of five women successfully reached the South Pole in 1993 becoming the first all-women team to do so.

In preparation for her largest endeavor, Reinette did commercial fishing in the Alaskan Gulf as well as training Iditarod sled dogs before embarking on her most grueling adventure, a solo winter crossing of Alaska. It was in 1994 when Reinette became the first woman to cross Alaska alone while filming the endeavor, herself, for National Geographic. Highlights of this trek include cross-country skiing 600 miles down the frozen Yukon River pulling a 160 lb sled in -55F temperature, building a canoe in an Athabascan native village and paddling 900 miles after spring break-up. She completed her 1,500-mile journey in 4 months and 6 days.

Reinette has traveled throughout 50 countries, summiting various mountains along the way such as Mt Rainier, Mt. Kilimanjaro and Mt. McKinley. Other previous pursuits include back packing around the world for 14 months on ten dollars a day, trekking across East Africa alone where she traveled for a month without money and most recently volunteering twice in the Hurricane Katrina area; rebuilding and animal rescue. Reinette returned to Nevada City in 2005 after studying and working as a film maker in Los Angeles for 8 years.

For the past twenty years Reinette has been a motivational speaker for many schools and groups throughout the west coast. Reinette is one of the founders of APPLE (Alliance for a Post-Petroleum Local Economy) dedicated to educating the community on the effects of oil depletion/global warming and the benefits of strong, local economy. Currently Reinette has co-founded a non-profit organization called PowerUp-NC with Kelly Casterson dedicated to finding energy efficient programs and incentives for Nevada City and other rural communities.

Last year Reinette and another gang of awesome community members started the charming Nevada City Farmers Market of which she was the market manager. Currently Reinette is the Mayor of Nevada City and is passionately working on a downtown Nevada City Community Garden.