Seeds of the Future: A Conversation with William Kötke [Free Podcast] 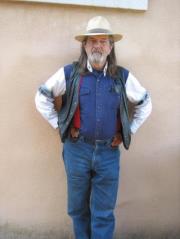 “The years as a sawmill worker in Oregon and California caused me to understand the point of view of those people. The Civil Rights Movement, the Vietnam War and the Summer of Love in Haight Ashbury woke all of us up to the realities of the planet. Years as a labor organizer and union business representative allowed me to understand why it is so difficult for the masses of us to make sudden beneficial changes. The years spent chopping wood and herding sheep for Katherine Smith, an elder of the relocation-threatened, Big Mountain Navajos, instructed me of the great strength of people who live with the earth. In residing with the Jicarilla Apach of New Mexico I came to understand the functioning of a tribe.”

People everywhere are waking up to the awareness that, with pollution, war, global outsourcing of our jobs, and rampant unregulated capitalism, we are pursuing an unsustainable path that can lead only to disaster. But there was a time when people began to wake up to this before – that period of time is called “the 1960’s.” Today on Conversations With Extraordinary People we hear from a man whose voice was first raised in the sixties, and still speaks to us from the middle of a forest in Southern Oregon where he continues to walk his talk.
William Kotke is a widely traveled and published author of the underground classic, The Final Empire: The Collapse of Civilization and the Seeds of the Future. He’s been a journalist, a novelist and essayist, and was active in the Civil Rights movement (with CORE), an anti-Vietnam war activist, a labor organizer and staff representative of Earthfirst! and the Native American Resistance.

In our conversation, we explore the materialistic values of our civilization that teach us that accumulation of wealth and progress are the same thing, how we are causing the death of our soils, forests, and fish stocks, and how we need to re-envision the role we play in the community of life. He says, “We are proposing to create no less than a completely new human culture – one that relates to the earth in a completely different way. Those who choose to respond in a positive way must gather the seeds of natural cultures and the truly beneficial things created by civilization – and carry them through the Apocalypse.”

William agrees with me in one of the diagnoses I made in Our Culture On the Couch http://www.OurCultureOnTheCouch.com/ – our way of thinking has led us to create a culture that is, for all intents and purposes, a cancer which is gradually destroying the body of life on this planet. We will discuss how the tools and techniques of the technological society (not a person or group) serve to addict, entrap, and enslave us all – and what it is that we can do to counteract this.

William’s approach is twofold – the first has to do with focusing your energy more locally, eating from your watershed, and participating in the right kind of community. The other is helping to awaken people from our illusions. He gets very specific – and talks about how important it is that we really develop and use local seeds and discover the incredible productivity possible through permaculture, eco-villages, etc.
“To be actively mobilizing toward the setting up of what might be called “seed communities” is the really significant action. If people don’t actually get out of the money economy to a significant degree, if they don’t create a new land-based culture that aides the earth, all the other political and environmental efforts will ultimately be meaningless.” – William Kotke

William H. Kotke is the author of the underground classic book. The Final Empire: The Collapse of Civilization and the Seed of the Future and also the recently published Garden Planet: The Present Phase Change of the Human Species.