Violence In America: The Good, The Bad, And The Ugly [Article]

The 9/11 terrorist attack, the Newtown Massacre, the Boston Marathon bombing – we, as Americans are fascinated with violence and frightened by it. We clustered in front of our TVs to watch the Twin Towers collapse again and again; violence in American media is omnipresent, especially gun violence. 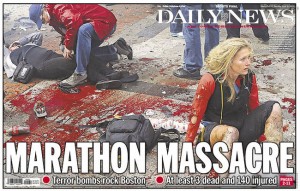 The rule in most newsrooms is “If It Bleeds, It Leads.” We struggle to explain each act of violence and hope that the blame we discover can be assigned to someone or something else. We want to “do something” about it, and the more advanced among us even look for ways to prevent it.

Until we recognize that anyone — even “someone like me” — can be violent, until we understand the nature of anger, we cannot change ourselves or alter the events that frighten us, and violence prevention will be impossible.

From the beginnings of our animal ancestry, anger has been part of the vigilance necessary to defend territory or protect life and limb. Anger is one of the responses linked to your “psychic domain” — the emotional and physical territory that you believe, consciously or unconsciously, to be under your protection or stewardship (your own body, loved ones, possessions, your self-image, etc.). A feeling of anger is often the first signal that your protective and defensive behaviors have been triggered.

Anger is a practical emotion that can be a valuable resource in case of emergency. However, the anger being expressed inappropriately as rampant violence in America and in our society, is of monumental proportions and a cause of great concern. Case after case of child abuse, domestic violence, and adolescent murders are documented, lamented, and condemned, but such studies and pronouncements will do little to change things. What we need is to stop treating anger according to the fantasy that it can be eradicated, and learn to acknowledge and modify the destructive forms it can take.

When we hear the word “violence” we tend to think of front-page headlines detailing acts of murder and mayhem, but anger and violence manifests themselves in far more subtle forms every day. Put-downs, words of criticism and blame, shaming, eroding the self-esteem of others — all are acts of emotional violence that leave internal scars on both perpetrator and victim.

It doesn’t matter what culture or what age we live in — the drive to protect our domain is there to preserve the species and is thoroughly ingrained in our nature as humans. When the deeper mind (with or without the concurrence of the conscious mind) believes something of value is being threatened and that you have the power to defend it, neurotransmitters are released into the cortex of the brain. These in turn, give rise to a feeling of “anger” and set into motion stereotypical attack-and-defend behaviors. (Conversely, when we feel powerless to defend our domain, fear and avoidance behaviors result.)

It is important to realize that violence and anger are not the same thing — that violent behavior is not caused by the anger you feel. Anger may be the trigger, but the behavior that results is always a choice made either consciously or unconsciously. Just as you may choose to laugh either inwardly or at the top of your voice when something strikes you as funny, so you can choose to suppress, disguise, or give full expression to anger as violence in the same way.

When compared to our other emotions, most of us have learned very little finesse in dealing with our anger or the anger of others.

Two crucial issues must be dealt with in the examination of these anger issues and our expression of it.

We cannot say that someone has either “too much” anger or too little. All we can do is evaluate whether the content of a person’s psychic domain is unrealistic or whether their defense of it is either too weak or too violent. Instead of feeling guilty when we feel angry, we need to examine the aspect or aspects of our psychic domain that triggers those feelings, as well as how we are choosing to express them. Look at your anger and you will learn a great deal about what your unconscious mind believes to belong to you, and also what it perceives as threat.

As you observe your own anger and your responses to it, you will likely find that some of your triggers and behaviors are, in reality, irrelevant to your success and wellbeing, and may actually be hurting you. This observation alone will give you greater control over your responses to those triggers, based on choice rather than on suppression or denial.

The content of our psychic domain (how we protect and defend it) and our anger issues are learned. Either it is actively taught to us by our parents, caretakers, and community (and television!), or observed and developed through life experiences. It is always about defense and control, and always related to our perception of who we are. (When it comes to anger, there is no way to feel satisfied with our response unless it truly reflects our deeper Self.) Our triggers are as unique as we are, the only common factor is that our subconscious mind has identified a threat to our well being and evoked a powerful urge to respond. In the smallest of time fragments a decision is made, influenced by the perceived immediacy of the threat in question.

A feeling of anger can be either part of a legitimate response to a threat to our well being or an automatic reaction to something you can’t, or shouldn’t try to control or defend. Often, what is needed is the serenity to get past that urge to “do something”, and the find the courage to move that particular trigger out of our psychic domain.

In the absence of reasoned behavior, the response to a feeling of anger can move beyond our control and end up being something we must apologize for,  or even regret for the rest of our lives.

How to Stop the Violence

This may not “make your day,” but we cannot seriously contemplate eliminating violence in our society until we look within ourselves.

The source of all violence is ordinary, garden-variety anger — at the moment we feel it, we are all capable of physical and emotional violence. If we cannot admit our anger, if we cannot modify what makes us angry, we cannot control violence. If we don’t understand it and deal with it, we are doomed to express and experience more and more violence both in our own lives and in the lives of the people we read about.

The answer we seek to the violence we fear must ultimately include an acceptance of anger and a redefinition of violence to include emotional abuse and the everyday injuries we inflict on others. We must be able to refine what triggers our personal anger reactions and learn to separate angry feelings from violent expressions and/or thoughts — only then can we change our society’s landscape to one of greater tolerance and peace, where anger plays a healthy role, and we are all protected from violence.

Further Readings on Stopping the Violence and Controlling Anger Issues

For more insights on violence, emotional healing, and the field of mind/body medicine: